Lemonnier has, from the very beginning of his career in 1863, re-mained an interpreter of Belgian life, and particularly of the life of the peasants. His novels are powerful exhibitions of the brutality of humankind, yet penetrated with a moving beauty of form and style. Lemonnier wrote several volumes of short stories, of which many reveal the melancholy aspect of old Flemish towns.The Soul of Veere is highly characteristic of this latter type of story.It originally appeared in a volume entitled It Was in Summer, first published in 1900. The translation by Barrett H. Clark, here printed for the first time, is included by permission of Albin Michel, publisher, Paris.

Little Pietje, who belonged to the inn on the public square, asked J me whether I had ever seen the boy who was always “playing his little tunes?” Now, what did she mean by that? I had been in Veere : three days and had seen no one answering to her description. Good heavens, I thought to myself, can there be anyone in Veere foolish enough to do that?It would be quite useless to play music there, as the houses are invariably closed, while only on the rarest occasions do you see at a window the face of an old man, an old woman, or a pretty girl in one of those flat caps with metal plaques over the temples. Why, there would be no one to listen to him! In the strange little village of Veere, they all look like mummies on exhibition behind their little squares of green or blue glass.That is my impression of the place. If by chance I had happened to hear that boy playing his little tunes through the streets, I would have put my finger to my lips as a warning not to disturb the silence that reigned in the depths of those houses.The sun itself, in scattered flecks of gold, sleeps in the middle of the street. It is long since it fell sick trying to reawaken the town that was once alive and is now fallen into a deep slumber. Its light dies on the threshold of houses, like the footstep of a beggar who returns morning after morning to a door which no one ever opens. The shades within have bolted their doors.If I live to be a hundred I shall never forget that street in Veere, nor the little houses jutting out over sidewalks that look as though they were clasping hands in prayer. It is all so far away from life that one has doubts of one`s own existence: only a faint shadow precedes you, and you are not quite sure at first whither it leads. But it leads in the direction of the churchyard, where all else has gone. 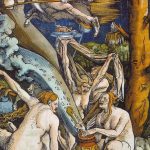 The Soul of Veere Part 2