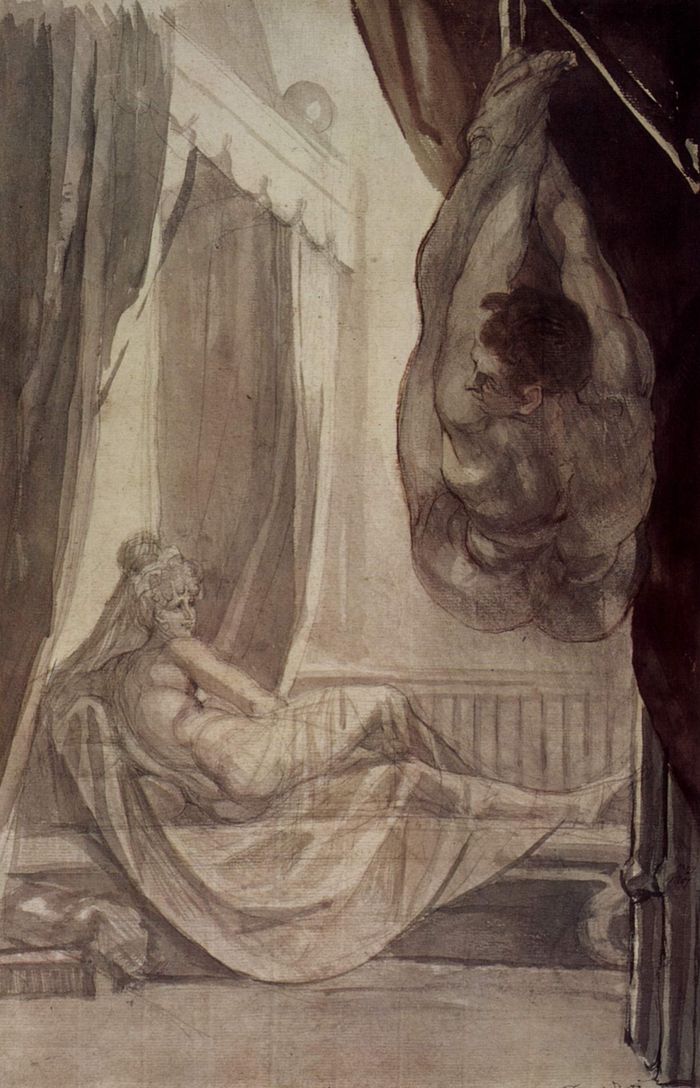 He looked on the maid right sweetly, and he said, “I will not cease to serve them. Never, while I live, will I lay head on pillow, till I have brought their desire to pass. For love of thee, dear lady, I will do this.”
And every day of twelve, in the sight of all the people, the youth walked by the side of the maiden as she went to the court. So they showed their love to the knight.

And there was merriment and gladness and delight in the hall of Gunther, without and within, among the valiant men. Ortwin and Hagen did many wonderful deeds, and if any devised a sport, warriors, joyous in strife, welcomed it straightway. So were the knights proven before the guests, and they of Gunther`s land won glory. The wounded also came forth to take part with their comrades, to skirmish with the buckler, and to shoot the shaft, and waxed strong thereby, and increased their might.

Gunther gave order that, for the term of the high tide 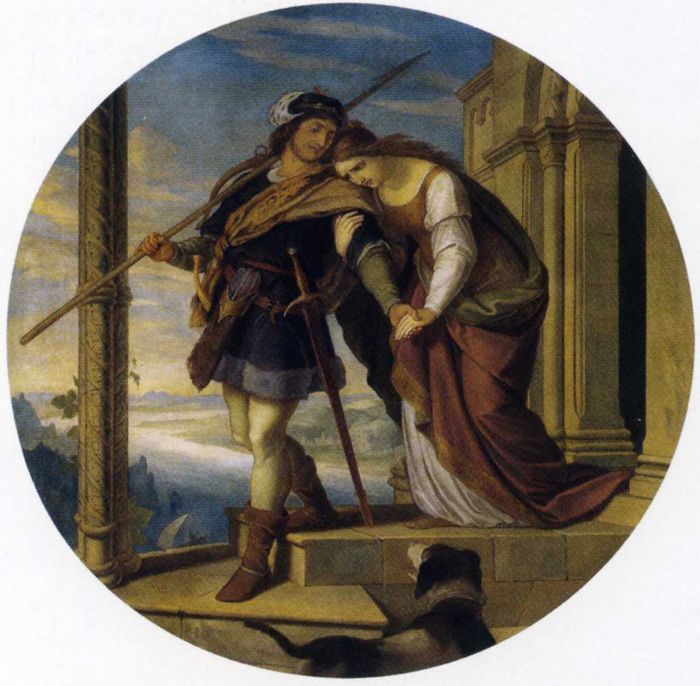 Thinking thus he waxed oft white and red; yea, graceful and proud stood the son of Sieglind, goodliest of heroes to behold, as 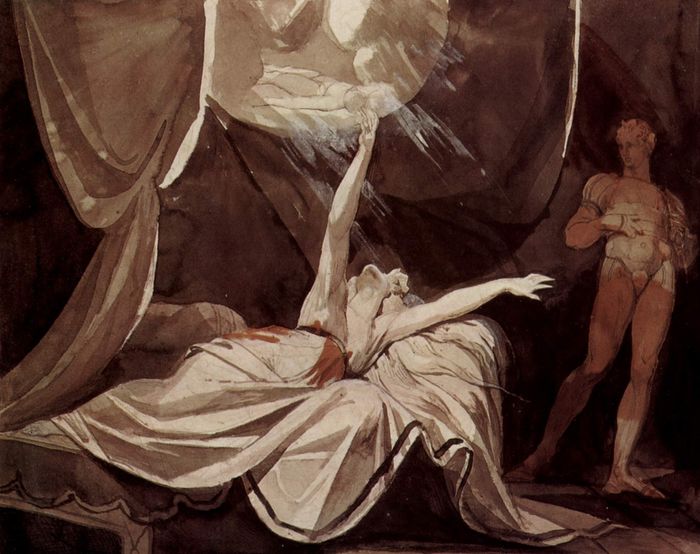 The guests brought with them to the Rhine, to the tourney, saddles worked in ruddy gold, and finely wrought shields, and knightly apparel. And the sick rejoiced, and they that lay on their beds sore wounded forgot that death is an hard thing. When the rumor of the festival was noised abroad, no man took heed more of them that groaned, for each thought only how he might sojourn there as a guest. Joy without measure had all they that were found there, and gladness and rejoicing were in Gunther`s land.

On Whitsun morning, there drew toward the high tide a goodly company of brave men, fairly clad: five thousand or more, and they made merry far and wide, and strove with one another in friendly combat.

Now Gunther knew well how, truly and from his heart, the hero of the Netherland loved his sister whom he had not yet seen, and whose beauty the people praised before that of all other maidens.

And he said, “Now counsel me, my kinsmen and my lieges, how we m 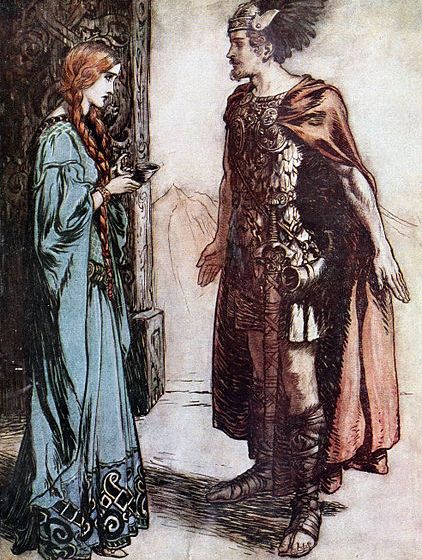 Said Gunther, “Ye shall both go free. Yet I must have a pledge that my foremen quit not my land till peace be sealed betwixt us.” And they promised, it and gave their hand thereon. They led them to their quarters to rest, and saw the wounded men laid softly in their beds. They set before them that were whole meat and good wine, and never were men merrier. They bare battered shields away into safe keeping; and the bloody saddles, of which there were Enow, they hid, that the women might not grieve thereat. Many a weary knight was there.

The king entreated his guests right royally, and the land was full of friends and of strangers. He bade see to the sore wounded ones whose pride was brought low. To them that were skilled in leech craft they offered a rich fee of unweighted silver and yellow gold, that they might heal the heroes of their wounds gotten in battle; the king sent also precious gifts to his guests. They that thought to ride home w 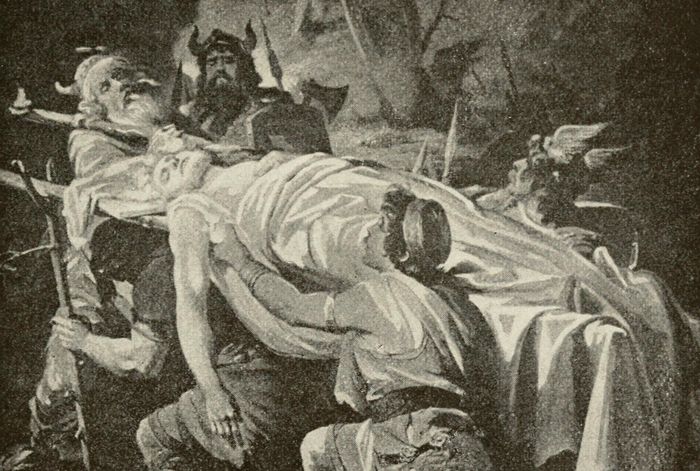 “Ortwin of Metz, also, won worship. Whoso came within range of his sword lieth wounded or dead. Thy brother, too, made fierce havoc in the battle. To his prowess must all testify. The proud Burgundians have so fought that none may question their honor. For many a saddle was emptied by them when the field rang loud with gleaming swords. On such wise fought the knights of the Rhine that their foemen had done better to flee. The brave men of Trony rode fiercely in the strife.

Hagen with his hand slew many, whereof Burgundy shall hear. So valiantly fought Sinolt and Hunolt, Gernot`s men, and eke Rumolt, that Ludger may well rue that he ever met thy kinsmen by the Rhine. But the mightiest deeds, first and last, were done by Siegfried. He bringeth rich captives into Gunther`s land, that his strength hath conquered by reason whereof King Ludgast and his brother, Ludger of Saxony, suffer dole. For list to the marvel, noble queen: both these princes hath Siegfried`s hand ta 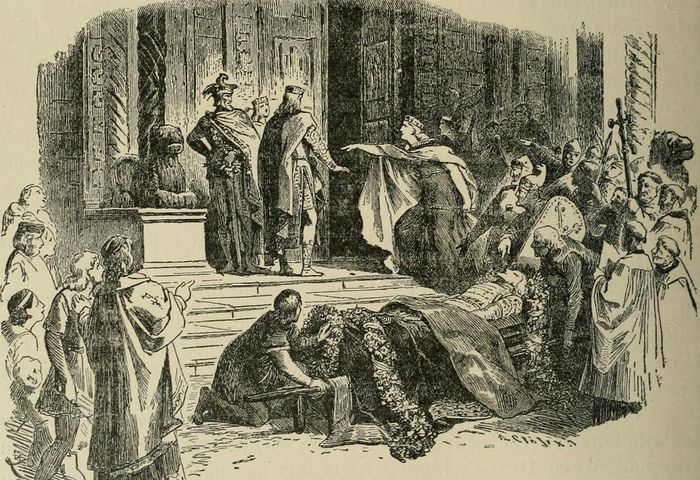 The dead lay in heaps. Sindolt and Hunolt and Ortwin the knight slew many in the strife. The princes held together in the fray. Bright spears in the hands of heroes flashed above the helmets, that clave the shining bucklers in twain. Many a massy shield was red with blood. In the fierce encounter many men fell from their horses.

Bold Siegfried and King Ludger strove together, and lances whizzed, and sharp spears. Ludger`s shieldplate flew off through the strength of Siegfried`s hand. Then the hero of the Nether land thought to have gotten the victory over the Saxons that were hard pressed. Ha! what polished bucklers doughty Dankwart brake!

Of a sudden Ludger espied a crown that was painted on Siegfried`s shield, and he knew the mighty man, and cried aloud to his friends, “Forbear, my men all. I have seen the son of Siegmund, even bold Siegfried. The Devil hath sent him hither into Saxony.” He bade lower the standard, and sued for peace. They granted thi 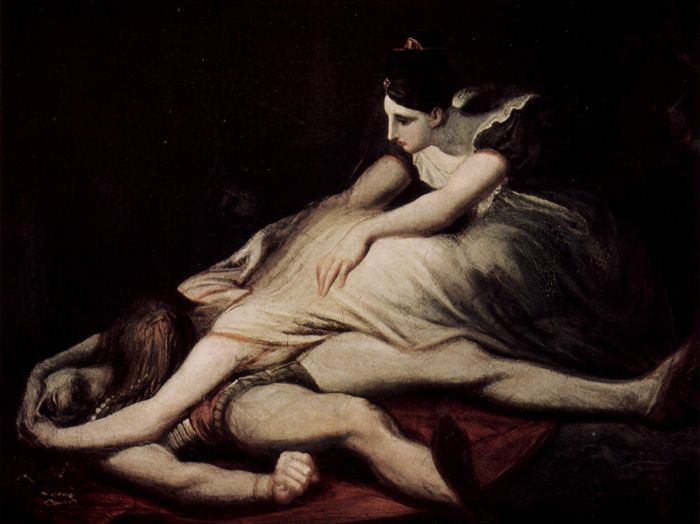 They of Denmark were aghast when they heard their king was taken captive; they told it to his brother, who fell in a great fury by reason of the disaster.

So the mighty Ludgast was taken by Siegfried`s prowess, and given in charge to Hagen. When that good knight heard that it was Ludgast he was not sorry.

They bade raise the standard of Burgundy. “Forward!” cried Siegfried. “More shall be done or the day end, if I lose not my life. The Saxon women shall rue it. Hearken now, ye men of the Rhine. I can lead you to Ludger`s army. There ye will see helmets hewn by the good hands of heroes. They shall be in evil case or we turn again.”

Then Gernot and his men sprang to horse. The banner was unfurled by Folker, the minstrel knight. He rode before the host, and they all made them ready for battle. They numbered not more than a thousand men, and thereto the twelve strangers. The dust rose from their path, and they rode through the land, their shield 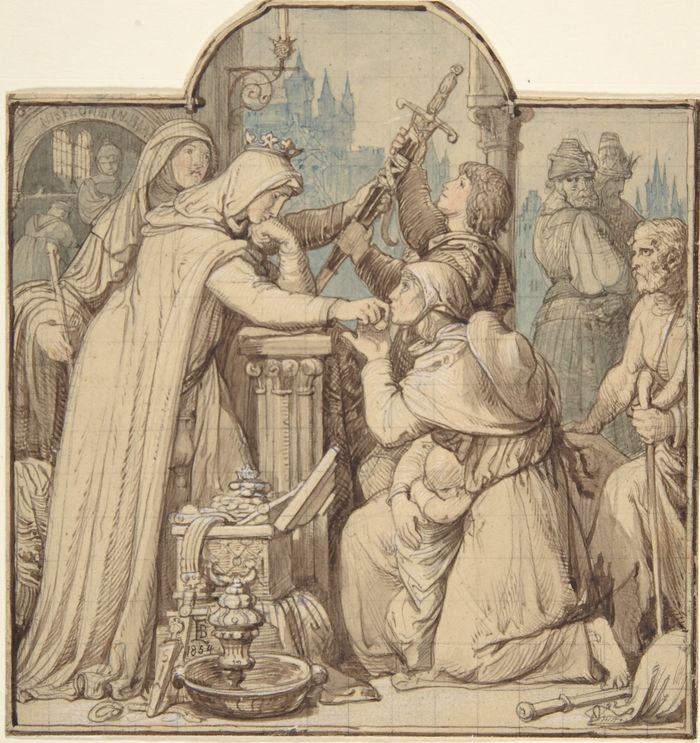 “Sit thou at home, O King,” spake Siegfried. “Since thy knights are willing to follow me, stay here by the women and be of good cheer; for, by my troth, I will guard for thee both goods and honor. I will see to it, that they that seek thee here at Worms by the Rhine bide where they are; we will pierce deep into their country, till their vaunting is turned to sorrow.”

They passed from the Rhine through Hesse against Saxony, where the battle was fought afterward. With plunder and with fire they laid waste the land, the which both the princes found to their cost.

When they were come to the marches, the warriors hasted forward, and Siegfried began to ask them, “Which of us shall guard the rest from surprise?” More to their hurt the Saxons never took the field.
They answered, “Let bold Dankwart guard the younger knights. He is a good warrior. So shall we come in less scathe by Ludger`s men. He and Ortwin shall guard the rear.” 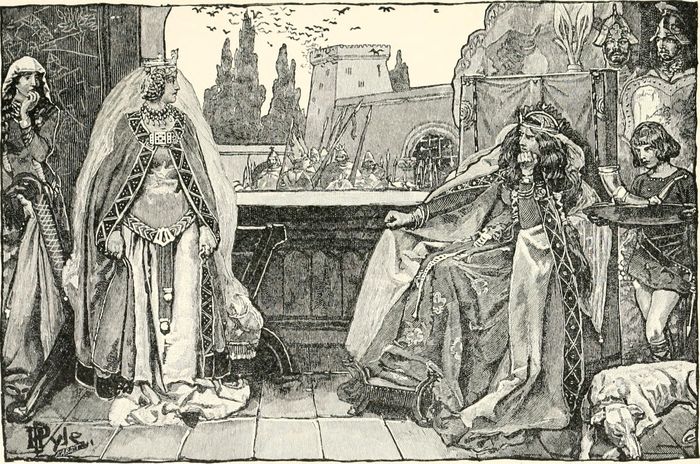 The king was heavy of his cheer, and Siegfried, the good knight, saw that he was downcast, but wist not the reason, and asked King Gunther what ailed him. “I marvel much,” said Siegfried, “that thou takest no part in our sports as heretofore.” And Gunther, the doughty knight, answered him, “Not to every man may I declare the secret heaviness of my heart; only unto true friends shall the heart tell its dole.”

Siegfried changed color, and grew red and white, and he said to the king, “I have denied thee naught, and now I would help thee. If thou seekest friends, I will be one of them, and stand to it truly to my life`s end.”

“Now God requite thee, Sir Siegfried, for I like thy word; and albeit thy might availed me nothing, I would rejoice none the less that thou art well minded toward me; as much and more will I do to thee if I live. I will tell thee the cause of my trouble. Envoys from my foemen have brought a message that with an army they will 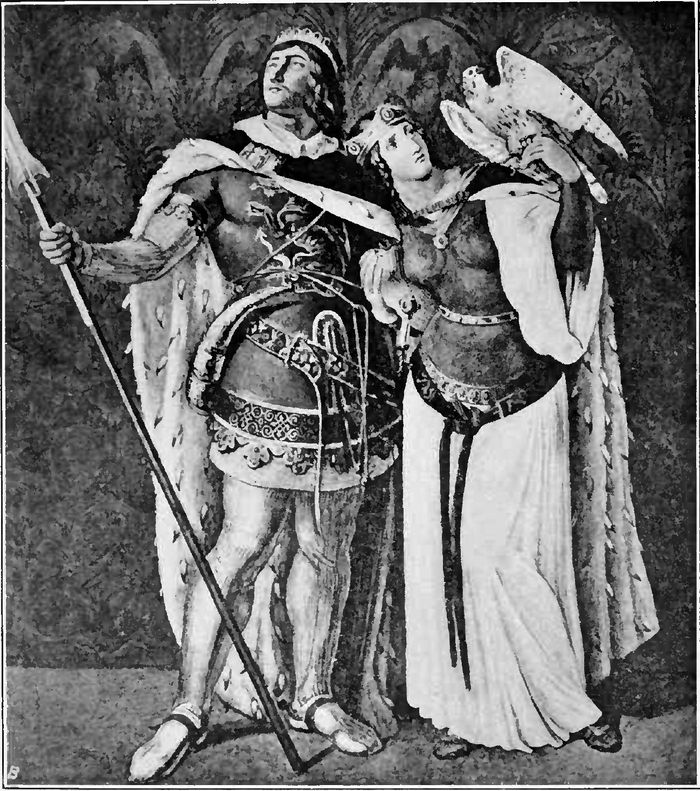 The unknown writer of the Nibelungenlied, or Lay of the Nibelungs, was an Austrian. Nothing is known of him except that he wrote his celebrated ballad epic toward the end of the Twelfth Century.

Rediscovered toward the end of the Eighteenth Century, the Lay is, in the words of Prof. Calvin Thomas, “a powerful poem and a human document of many sided interest.” The component episodes are related with great vivacity, and the characters developed by means of a powerful imagination. The Lay was founded upon earlier versions of various legends, traditions, and songs that were current in pre-Christian times. Many of the same stories are found in the two Icelandic Eddas and in the Volsunga Saga.

The present version comprises two chapters, or “Adventures” (the fourth and fifth) of The Fall of the Nibelungs, translated by Margaret Armour, Everyman`s Library. Reprinted by permission of the publishers, J. M. Dent and Sons. T