The Sailor and the Pearl Merchant part 4 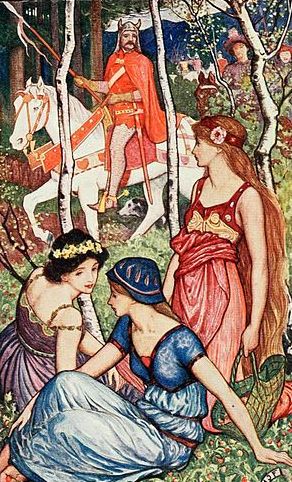 In great terror the sailors saw their ship being carried like the wind against the mountain. Soon it was caught in the whirlpool, where the wrecks of ten thousand ancient ships were being carried around in the swirling current. The sailors and merchants in the ship crowded to Abu’l Fawaris, begging him to tell them what they could do. He cried out to them to prepare all the ropes which they had in the ship; he would then swim out of the whirlpool and on to the shore at the foot of the mountain, where he would make fast to some stout tree. Then they were to cast their ropes to him and so he would rescue them from their peril. By great good fortune the current cast him out upon the shore, and he made the rope of his ship fast to a stout tree.

Then, as soon as was possible, the sailor climbed to the top of the mountain in search of food, for neither he nor his shipmates had eaten for some days. When he reached the summit he found a pleasant plain stretching away in front of him, and in the midst of it he saw a lofty arch, made of green stone. As he approached it and entered, he observed a tall pillar made of steel, from which there hung by a chain a great drum of Damascus bronze covered with a lion’s skin.

From the arch also hung a great tablet of bronze, upon which was engraved the following inscription: “O thou that dost reach this place, know that when Alexander voyaged round the world and reached the Lion’s Mouth, he had been made aware of this place of calamity. He was therefore accompanied by four thousand wise men, whom he summoned and whom he commanded to provide a means of escape from this calamitous spot. For long the philosophers pondered on the matter, until at last Plato caused this drum to be made, whose quality is that if any one, being caught in the whirlpool, can come forth and strike the drum three times, he will bring out his ship to the surface.”

When the sailor had read the inscription, he quickly made his way to the shore and told his fellows of it. After much debate he agreed to risk his life by staying on the island and striking the drum, on condition that they would return to Basrah on their escape, and give to his wife and sons one-half of what treasure they had in the ship. He bound them with an oath to do this, and then returned to the arch. Taking up a club he struck the drum three times, and as the mighty roar of it echoed from the hills, the ship, like an arrow shot from a bow, was flung out of the whirlpool. Then with a cry of farewell to Abu’l Fawaris from the crew, they sailed to Basrah, where they gave one-half the treasure which they had to the sailor’s family.

Posted in:
Tags: The Sailor and the Pearl Merchant
/ 0 Comments