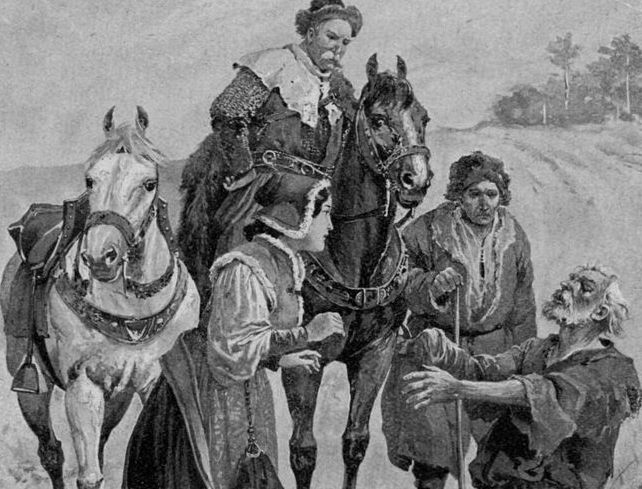 Once he had been on guard in that village all night; now that past stood bef°re b at once in a series of views. He is an Uhlan again and he stands there on guard; at a distance is the public-house; he looks with swimming eyes. There is thundering and singing and shouting amid the silence the night, with voices of fiddles and bass-viols “U-ha! U-ha!” Then the Uhlans knock out fire with their horseshoes, and it is wearisome for him there on his horse.

The hours drag on slowly; at last the lights are quenched; now as far as the eye reaches there is mist, and mist impenetrable; now the fog rises, evidently from the fields, and embraces the whole world with a whitish cloud. You would say, a complete ocean. But that is fields; soon the land-rail will be heard in the darkness, and the bitterns will call from the reeds. The night is calm and cool -in truth, a Polish night! In the distance the pine-wood is sounding without wind, like the roll of the sea. Soon dawn will whiten the east. In fact, the cocks are beginning to crow behind the hedges. One answers to another from cottage to cottage; the storks are screaming somewhere on high. The Uhlan feels well and bright.

Someone had spoken of a battle to-morrow. Hei! that will go on, like all the others, with shouting, with fluttering of flaglets. The young blood is playing like a trumpet, though the night cools it. But it is dawning. Already night is growing pale ; out of the shadows come forests, the thicket, a row of cottages, the mill, the poplars. The well is squeaking like a metal banner on a tower. What a beloved land, beautiful in the rosy gleams of the morning! Oh, the one land, the one land!

Quiet! the watchful picket hears that someone is approaching. Of course, they are coming to relieve the guard.

Suddenly some voice is heard above Skavinski:

The old man opens his eyes, and looks with wonder at the person standing before him. The remnants of the dream visions struggle in his head with reality. At last the visions pale and vanish. Before him stands Johnson, the harbor guide.

‘You didn’t light the lantern. You must leave your place. A vessel from St. Geromo was wrecked on the bar. It is lucky that no one was drowned, or you would go to trial. Get into the boat with me; you’ll hear the rest at the Consulate.”

The old man grew pale; in fact he had not lighted the lantern that night.

A few days later, Skavinski was seen on the deck of a steamer, which was going from Aspinwall to New York. The poor man had lost his place. There opened before him new roads of wandering; the wind had torn that leaf away again to whirl it over lands and seas, to sport with it till satisfied. The old man had failed greatly during those few days, and was bent over; only his eyes were gleaming. On his new road of life he held at his breast his book, which from time to time he pressed with his hand as if in fear that too might go from him.